Moishe Postone undertakes a fundamental reinterpretation of Karl Marx#s mature critical theory. He calls into question many of the presuppositions of traditional Marxist analyses and offers new interpretations of Marx#s central arguments. He does so by developing concepts aimed at grasping the essential character and historical development of modern society, and also at overcoming the familiar dichotomies of structure and action, meaning and material life. These concepts lead him to an original analysis of the nature and problems of capitalism and provide the basis for a critique of #actually existing socialism#. According to this new interpretation, Marx identifies the core of the capitalist system with an impersonal form of social domination generated by labor and the industrial production process are characterized as expressions of domination generated by labor itself and not simply with market mechanisms and private property. Proletarian labor and the industrial production process are characterized as expressions of domination rather than as means of human emancipation. This reinterpretation entails the form of economic growth and the structure of social labor in modern society to the alienation and domination at the heart of capitalism. This reformulation, Postone argues, provides the foundation for a critical social theory that is more adequate to late twentieth-century capitalism. Contents Part I. A Critique of Traditional Marxism: 1. Rethinking Marx#s critique of capitalism; 2. Presuppositions of traditional Marxism; 3. The limits of traditional Marxism and the pessimistic turn of Critical Theory; Part II. Toward a Reconstruction of the Marxian Critique: The Commodity 4. Abstract labor; 5. Abstract time; 6. Habermas#s critique of Marx; Part III. Toward a Reconstruction of the Marxian Critique: capital; 7. Toward a theory of capital; 8. The dialectic of labor and time; 9. The trajectory of production; 10. Concluding considerations. 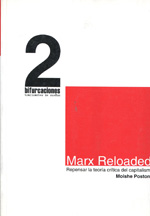