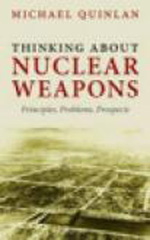 The book reflects the author's experience across more than forty years in assessing and forming policy about nuclear weapons, mostly at senior levels close to the centre both of British governmental decision-making and of NATO's development of plans and deployments, with much interaction also with comparable levels of United States activity in the Pentagon and the State department. Part I of the book seeks to distill, from this exceptional background of practical experience, basic conceptual ways of understanding the revolution brought about by nuclear weapons. It also surveys NATO's progressive development of thinking about nuclear deterrence, and then discusses the deep moral dilemmas posed - for all possible standpoints - by the existence of such weapons. Part II considers the risks and costs of nuclear-weapon possession, including proliferation dangers, and looks at both successful and unsuccessful ideas about how to manage them. Part III illustrates specific issues by reviewing the history and current policies of one long-established possessor, the United Kingdom, and two more recent ones, India and Pakistan. Part IV turns to the future, examines the goal of eventually abolishing all nuclear armouries, and then discusses the practical agenda, short of such a goal, which governments can usefully tackle in reducing the risks of proliferation and other dangers while not surrendering prematurely the war-prevention benefits which nuclear weapons have brought since 1945. This book is a project of the Oxford Leverhulme Programme on the Changing Character of War.