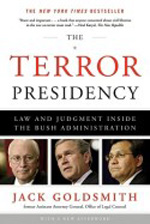 The terror presidency
Law and judgment inside the Bush Administration

Jack Goldsmith's duty as head of the Office of Legal Counsel was to advise President Bush on what he could and could not do...legally. His unflinching insistence that America abide by the law put him on a collision course with powerful figures in the administration. In "The Terror Presidency" he 'reaches beyond personal memoir to offer a historical comparison to the legal powers available to Presidents in time of war and emergency' (Kenneth Anderson, "The Times Literary Supplement") and shows how Bush damaged his own presidency, compromising the ability of his successors to respond forcefully in times of crisis.

Who controls the Internet?