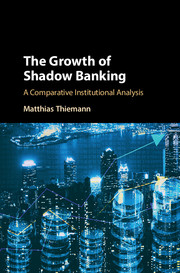 The growth of shadow banking
a comparative and institutional analysis

The 'shadow banking system' refers to a system of credit-provision occurring outside of the official regulatory perimeter of commercial banks. Facilitated by securitization vehicles, mutual funds, hedge funds, investment banks and mortgage companies, the function and regulation of these shadow banking institutions has come under increasing scrutiny after the subprime crisis of 2007–8. Matthias Thiemann examines how regulators came to tolerate the emergence of links between the banking and shadow banking systems. Through a comparative analysis of the US, France, the Netherlands and Germany, he argues that fractured domestic and global governance systems determining the regulatory approach to these links ultimately aggravated the recent financial crisis. Since 2008, shadow banking has even expanded and the incentives for banks to bend the rules have only increased with increasing regulation. Thiemann's empirical work suggests how state-finance relations could be restructured to keep the banking system under state control and avoid future financial collapses.

Considers how globalization shapes the regulation of finance
Explains why regulation failed but also when and why it worked
Analyzes the rise of shadow banking in Germany, the Netherlands and France as well as the better known cases of the US and UK

1. States and the regulation of a globalized finance
2. The ABCP-market at the heart of shadow banking and the financial crisis
3. How to explain the absence of regulatory action on shadow banking
4. The transformation of US financial markets since the 1960s and the emergence and growth of the ABCP market
5. In the shadow of Basel
6. Converging procedures or standards? The challenge of the IASC and domestic pathways to SIC 12
7. Steering finance towards prudence – the role of banking regulators in the governance of compliance decisions
8. The fate of the bank-based shadow banking system post-crisis
9. Changing the façade, but not the structure: the continuing threat of shadow banking