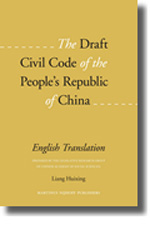 The draft Civil Code of the people's Republic of China

Since the beginning of the 20th century, various attempts have been made by legal scholars to draft a Civil Code in China. However, only since the 1980s, when the #open-door# policy was implemented, has Chinese Civil law become the basis for the development of a socialist market economy. Since the adoption of Chinese contract law (1999), property Law (2007) and tort Law (2009) in recent years, the basic construction of a socialist civil law system has been formulated. For the completion of a systematic civil law structure, a Civil Code has now been further advocated by society. The Draft Civil Code, prepared by the Chinese Academy of Social Sciences headed by Liang Huixing, is the first Draft Civil Code since the establishment of the People#s Republic of China. The English translation of this code aims to provide a source for western scholars to provide some knowledge on recent developments of Chinese civil law.