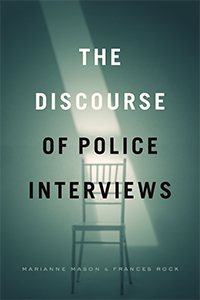 The discourse of police interviews

Forensic linguistics, or the study of language and the law, is a growing field of scholarly and public interest with an established research presence. The Discourse of Police Interviews aims to further the discussion by analyzing how police interviews are constructed and used to investigate and prosecute crimes.

The first book to focus exclusively on the discourses of police interviewing, The Discourse of Police Interviews examines leading debates, approaches, and topics in contemporary police interview research. Among other topics, the book explores the sociolegal, psychological, and discursive framework of popular police interview techniques employed in the United States and the United Kingdom, such as PEACE and Reid, and the discursive practices of institutional representatives like police officers and interpreters that can influence the construction and quality of linguistic evidence. Together, the contributions situate the police interview as part of a complex, and multistage, criminal justice process. The book will be of interest to both scholars and practitioners in a variety of fields, such as linguistic anthropology, interpreting studies, criminology, law, and sociology.

Section 1. The Discourse of Reid and PEACE

Chapter 4. The Guilt-Presumptive Nature of Custodial Interrogations in the United States: The Use of Confrontation, Appeals to Self-Interest, and Sympathy/Minimization in the Reid Technique
Marianne Mason

Chapter 5. The Discourse Structure of Blame Mitigation in a Police Interrogation
Philip Gaines

Chapter 6. Now the Rest of the Story: The Collaborative Production of Confession Narratives in Police Interrogations
Gary C. David and James Trainum

Section 4. The Discursive Journey and Institutional Applications of Police Interviews

Chapter 12. “Tell Me in Your Own Words…”: Reconciling Institutional Salience and Witness-Compatible Language in Police Interviews with Women Reporting Rape
Nicci MacLeod

Chapter 13. “Are You Saying You Were Stabbed . . . ?”: Multimodality, Embodied Action, and Dramatized Formulations in “Fixing” the Facts in Police Interviews with Suspects
Alison Johnson 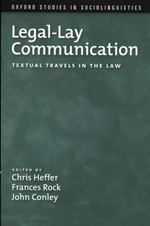