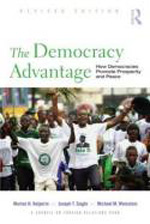 The democracy advantage
how democracies promote prosperity and peace

"The Democracy Advantage" provides an empirically-grounded analysis of the consistently positive development track record of poor countries with democratic governments versus those with more oppressive political systems. Building on the democratic peace literature, Halperin, Siegle, and Weinstein also connect the dots of how democracy and development contribute to lower levels of intrastate conflict and popular support for extremist ideologies. This analysis, in turn, provides the foundation for a series of policy recommendations for how democracy can become a more central feature of U.S. and international engagement in the developing world.In short, "The Democracy Advantage" is an evenly argued liberal internationalist justification for making democracy a central feature of U.S. foreign policy. This freshly revised edition features updated examples and data throughout. Key features include: Case studies on Egypt, Saudi Arabia, and Pakistan on the security- democracy connection; Case studies on Russia, Bulgaria, Ecuador, Nigeria, Indonesia, and Mali on the politics-development-democracy connection; In-depth treatment of every region of the developing world; Renewed emphasis on democratization in face of the Iraq War.