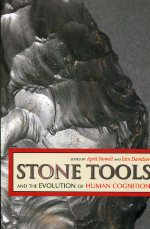 Stone tools
and the evolution of human congnition

Stone tools are the most durable and common type of archaeological remain and one of the most important sources of information about behaviours of early hominins. This book develops methods for examining questions of cognition, demonstrating the progression of mental capabilities from early hominins to modern humans through the archaeological record. Dating as far back as 2.5-2.7 million years ago, stone tools were used in cutting up animals, woodworking, and preparing vegetable matter. Today, lithic remains give archaeologists insight into the forethought, planning, and enhanced working memory of our early ancestors. Contributors focus on multiple ways in which archaeologists can investigate the relationship between tools and the evolving human mind-including joint attention, pattern recognition, memory usage, and the emergence of language. Offering a wide range of approaches and diversity of place and time, the chapters address issues such as skill, social learning, technique, language, and cognition based on lithic technology. "Stone Tools and the Evolution of Human Cognition" will be of interest to Paleolithic archaeologists and paleoanthropologists interested in stone tool technology and cognitive evolution.