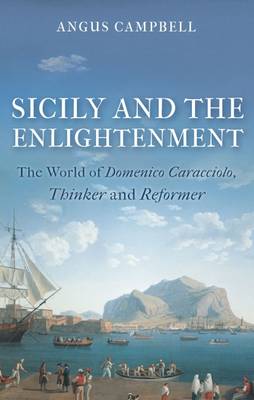 Sicily and the Enlightenment
the world of Domenico Caracciolo, thinker and reformer

Dominico Caracciolo was an important figure on the eighteenth-century European stage, holding high office as a diplomat in London, Turin and Paris, and as viceroy and prime minister in the Two Sicilies. He was an inveterate letter-writer and his huge correspondence, with his diplomatic despatches and other official writing, is a unique original source, providing a detailed and vivid picture of the eighteenth-century European elite with all its extravagance and scandalous behaviour but, even more importantly, it is an account of an Enlightenment struggle against the increasingly outdated clerical and feudal rule in Sicily. Caracciolo was an abrasive and combative official and politician and vigorous scion of the Enlightenment. In this book, Angus Campbell provides a detailed portrait of Caracciolo and of the political, social, economic, legal and cultural context in which he lived and worked. In doing so, he provides a unique vantage point on the European diplomatic culture of the eighteenth century.