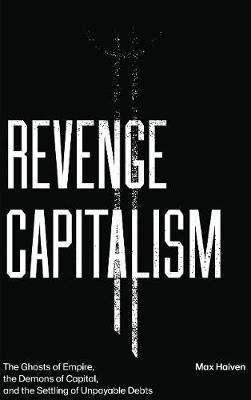 Revenge capitalism
the ghosts of empire, the demons of capital, and the settling of unpayable debts

Capitalism is in a profound state of crisis. Beyond the mere dispassionate cruelty of 'ordinary' structural violence, it appears today as a global system bent on reckless economic revenge; its expression found in mass incarceration, climate chaos, unpayable debt, pharmaceutical violence and the relentless degradation of common life.

In Revenge Capitalism, Max Haiven argues that this economic vengeance helps us explain the culture and politics of revenge we see in society more broadly. Moving from the history of colonialism and its continuing effects today, he examines the opioid crisis in the US, the growth of 'surplus populations' worldwide and unpacks the central paradigm of unpayable debts - both as reparations owed, and as a methodology of oppression.

Revenge Capitalism offers no easy answers, but is a powerful call to the radical imagination.

Introduction: We Want Revenge
1. Toward a materialist theory of revengeInterlude: Shylock's vindication, or Venice's bonds?
2. The work of art in an age of unpayable debts: social reproduction, geopolitics, and settler colonialismInterlude: Ahab's coin, or Moby Dick's currencies?
3. Money as a medium of vengeance: Colonial accumulation and proletarian practices Interlude: Khloe Kardashian's revenge body, or the Zapatisa nobody?
4. Our opium Wars: Pain, race, and the ghosts of empireInterlude: V's vendetta, or Joker's retribution?
5. The dead zone: Financialized nihilism, toxic wealth, and vindictive technologiesConclusion: Revenge fantasy or avenging imaginary?

Postscript: After the pandemic: Against the vindictive normal