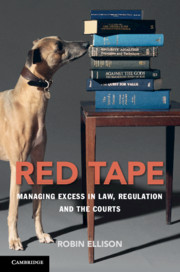 Red tape
managing excess in Law, regulation and the courts

Red Tape tells the sometimes astonishing story of the making of laws, both good and bad, the recent explosion in rule making, and the failure of repeated attempts to rationalise the statute books - even governments themselves are concerned about the increasing number and complexity of our laws. Society requires the rule of law, but the rule of too much law means that the general public faces frustrating excesses created by overzealous regulators and lawmakers. Robin Ellison reveals the failure of repeated attempts to limit the number and complexity of new laws, and the expansion of regulators. He challenges the legislature to introduce fewer yet better laws and regulators by encouraging lawmakers to adopt practices which improve the efficiency of the law and the lives of everyone. Too much law leads to frustration for all - Red Tape is a long overdue exposé of our legal system for practitioners and consumers alike.

1. Introduction
2. The law will fix it
3. Legislation and legislators
4. Regulation and regulators
5. Courts and judges
6. Unregulation
7. Where next?