Politeia in greek and roman Philosophy

This is the first exploration of how ideas of politeia (constitution) structure both political and extra-political relations throughout the entirety of Greek and Roman philosophy, ranging from Presocratic to classical, Hellenistic, and Neoplatonic thought. A highly distinguished international team of scholars investigate topics such as the Athenian, Spartan and Platonic visions of politeia, the reshaping of Greek and Latin vocabularies of politics, the practice of politics in Plato and Proclus, the politics of value in Plato, Aristotle and the Stoics, and the extension of constitutional order to discussions of animals, gods and the cosmos. The volume is dedicated to Professor Malcolm Schofield, one of the world's leading scholars of ancient philosophy. 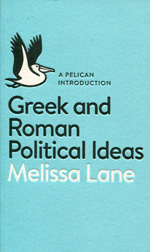