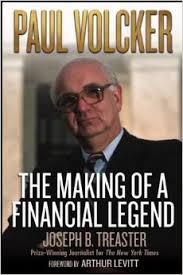 Paul Volcker
the making of a financial legend

"Paul Volcker may be the most important figure of our time on the U.S. economic scene. In his book, Paul Volcker: The Making of a Financial Legend, Joseph Treaster has captured the man, his time, and his influence with exceptional insight, clarity, and readability. It#s a must-read for anyone interested in the American economy." #Myron Kandel, CNN Financial Editor "Only a truly great chairman of the Federal Reserve could stay the course, keep interest rates at an all-time high to lower inflation, and save the economy in the face of near unanimous denunciation and derision. That drumbeat was summed up in a congressman#s shout, #Your course of action is wrong. There isn#t anybody who says you#re right.# That chairman was Paul Volcker. Events, of course, proved Volcker right." #Ed Koch, former Mayor, New York City and current Partner, Bryan Cave LLP "Paul Volcker is a true American hero. His courage as a central banker in leading the assault on the Great Inflation of the 1970s was the single most important step on the road to economic renewal in the United States. Treaster#s probing look inside the man reveals a strength of character that made it easy for Volcker to do the toughest job in America." #Stephen S. Roach, Chief Global Economist, Morgan Stanley "At a time when a number of business leaders have betrayed the public trust upon which their power, position, and, ultimately, the prosperity of their companies depend, Paul Volcker stands out as a financial leader of unusual competence, unquestionable diligence, and uncompromising integrity. Joseph Treaster has vividly captured the essential greatness of the man in his excellent book." #David Rockefeller III, former Chairman and CEO of The Chase Manhattan Bank "Joseph Treaster has written a splendidly useful book that reveals how one courageous banker broke the back of double-digit inflation in America. There are up-to-the-minute lessons here for everyone who wants to learn from history rather than be condemned to re