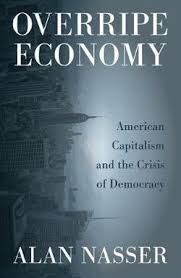 Overripe economy
American capitalism and the crisis of democracy

Capitalism is in crisis. Overripe Economy uses a historical view to explain how we got here and why. Taking readers through the history of American capitalism--from the ruthless competition of the nineteenth century to the maturation of industrial capitalism in the early part of the twentieth and on into today’s finance-ridden decline--Alan Nasser lays out here in damning detail why the persistent austerity of financialized capitalism is the inevitable outcome of the evolution of the American economy. Capitalism, he argues, ultimately presents us with two alternatives: persistent austerity, declining democracy, and a privatized state, or a polity and economy characterized by genuine economic democracy

From industrialisation to the present day, Overripe Economy is a genealogy of the emergence of a finance-ridden, authoritarian, austerity-plagued American capitalism. This panoramic political-economic history of the country, surveys the ruthlessly competitive capitalism of the nineteenth century, the maturation of industrial capitalism in the 1920s, the rise and fall of capitalism's Golden Age and the ensuing decline towards the modern era. Alan Nasser shows why the emergence of the persistent austerity of financialised neoliberal capitalism is the natural outcome of mature capitalism's evolution, revealing both the key structural and political vulnerabilities of capitalism itself and points towards the kind of system that can transcend it. At the centre of the argument, is capitalism's ultimatum: either a 'new normal' of persistent austerity, declining democracy and a privatised state, or a polity and economy characterised by an economic democracy that can ensure both higher wages and a shorter working week.