The title of the book comes from the description of believers in the Abrahamic faith traditions in the Qur'an. Brown very simply proceeds through his book to help Jews and Christians understand the role that several biblical figures from their own traditions play in Islam. Do Christians know, for example, that Jesus in the Qur'an was speaking about Muhammad when he promised to send an Advocate or Comforter? Who would have imagined that Noah had a rebellious son who refused to get on the ark? Brown uses this method of examining scriptural characters as a way of seeing Islam in its pure light, without the distortions of history or individual failings. 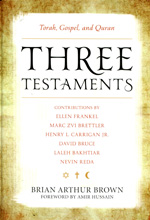