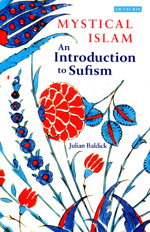 Mystical Islam
an introduction to sufism

Sufism is Islam's principal mystical tradition. To its followers it provides the inner, esoteric or purely spiritual dimension of the faith. It is a centuries-old path to spirituality with devotees throughout the Islamic world, fundamentally influencing Muslim belief. To non-Muslim observers it remains exotic, mysterious and little-understood. "Mystical Islam" is an accessible introduction that encompasses the history of the Sufi spiritual tradition, ranging from the great Mughal and Safavid empires of India and Persia to the Whirling Dervishes of Ottoman Turkey. Julian Baldick reveals the continuing relevance of the Sufi spiritual experience and introduces some of the great figures of Sufism: al-Ghazali, Ibn Arabi, Hafiz of Shiraz and Rumi. It is the writings of such masters that reveal the inner beauty of Sufism, while offering followers the most profound insights in their quest for delivery from the narrow confines of the material world. At the same time, the author's reflections on recent Sufi scholarship, and his fresh perspectives on this tradition of belief and devotion, will prove essential for students and highly stimulating for general readers.