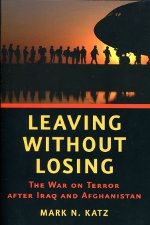 Leaving without losing
the war on terror after Iraq and Afghanistan

As the United States withdraws its combat troops from Iraq and Afghanistan, politicians, foreign policy specialists, and the public are worrying about the consequences of leaving these two countries. Neither nation can be considered stable, and progress toward democracy in them - a principal aim of America and the West - is fragile at best. But, international relations scholar Mark N. Katz asks: Could ending both wars actually help the United States and its allies to overcome radical Islam in the long term? Drawing lessons from the Cold War, Katz makes the case that rather than signaling the decline of American power and influence, removing military forces from Afghanistan and Iraq puts the U.S. in a better position to counter the forces of radical Islam and ultimately win the war on terror. He explains that since both wars will likely remain intractable, for Washington to remain heavily involved in either is counter-productive. Katz argues that looking to its Cold War experience would help the U.S. find better strategies for employing America's scarce resources to deal with its adversaries now. This means that, although leaving Afghanistan and Iraq may well appear to be a victory for America's opponents in the short term-as was the case when the U.S. withdrew from Indochina-the larger battle with militant Islam can be won only by refocusing foreign and military policy away from these two quagmires. This sober, objective assessment of what went wrong in the U.S.-led wars in Afghanistan and Iraq and the ways the West can disentangle itself and still move forward draws striking parallels with the Cold War. Anyone concerned with the future of the War on Terror will find Katz's argument highly thought provoking.