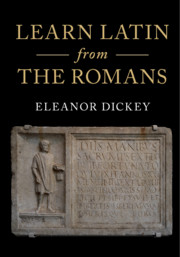 Learn Latin from the Romans is the only introductory Latin textbook to feature texts written by ancient Romans for Latin learners. These texts, the 'colloquia', consist of dialogues and narratives about daily life similar to those found in modern-language textbooks today, introducing learners to Roman culture as well as to Latin in an engaging, accessible, and enjoyable way. Students and instructors will find everything they need in one complete volume, including clear explanations of grammatical concepts and how Latin works, both British and American orders for all noun and adjective paradigms, 5,000 easy practice sentences, and over 150 longer passages (from the colloquia and a diverse range of other sources including inscriptions, graffiti, and Christian texts as well as Catullus, Cicero, and Virgil). Written by a leading Latin linguist with decades of language teaching experience, this textbook is suitable for introductory Latin courses worldwide.

-Passages are taken from leading literary writers like Cicero, Catullus and Virgil, and from inscriptions and graffiti, as well as the 'colloquia'.
-Grammatical terminology is introduced from the start, allowing students to gain confidence immediately.
-All noun and adjective paradigms are given in both the British order and the American order.
-Includes over 5,000 short practice sentences and over 150 longer passages for continuous reading practice.