Interest and prices
foundations of a theory of monetary policy

With the collapse of the Bretton Woods system, any pretense of a connection of the world's currencies to any real commodity has been abandoned. Yet since the 1980s, most central banks have abandoned money- growth targets as practical guidelines for monetary policy as well. How then can pure "fiat" currencies be managed so as to create confidence in the stability of national units of account? Interest and Prices seeks to provide theoretical foundations for a rule- based approach to monetary policy suitable for a world of instant communications and ever more efficient financial markets. In such a world, effective monetary policy requires that central banks construct a conscious and articulate account of what they are doing. Michael Woodford reexamines the foundations of monetary economics, and shows how interest-rate policy can be used to achieve an inflation target in the absence of either commodity backing or control of a monetary aggregate. The book further shows how the tools of modern macroeconomic theory can be used to design an optimal inflation-targeting regime--one that balances stabilization goals with the pursuit of price stability in a way that is grounded in an explicit welfare analysis, and that takes account of the "New Classical" critique of traditional policy evaluation exercises. It thus argues that rule-based policymaking need not mean adherence to a rigid framework unrelated to stabilization objectives for the sake of credibility, while at the same time showing the advantages of rule-based over purely discretionary policymaking. 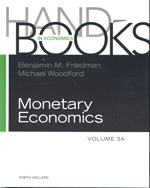