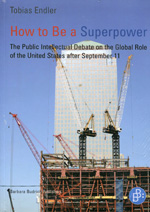 How To Be a Superpower is a unique and insightful book that explores the role and self-perception of public intellectuals in 21st-century America. The book evaluates a series of interviews Tobias Endler conducted with the most prominent 'professional thinkers' in the field of foreign policy since 9/11. The original interviews were published in Endler's previous book After 9/11: Leading Political Thinkers about the World, the U.S. and Themselves: 17 Conversations. Challenging the idea that intellectuals are becoming increasingly irrelevant, the new book argues that they have managed to stake out a significant role in present society. Accelerated and intensified by the events of 9/11, renowned experts - such as Zbigniew Brzezinski, Noam Chomsky, Francis Fukuyama, Anne-Marie Slaughter, and Michael Walzer - have engaged in a vibrant public political debate on the global status of the United States. The fascinating interviews illustrate how intellectuals inspire, influence, and participate in the nation's current public discourse and opinion-shaping process.