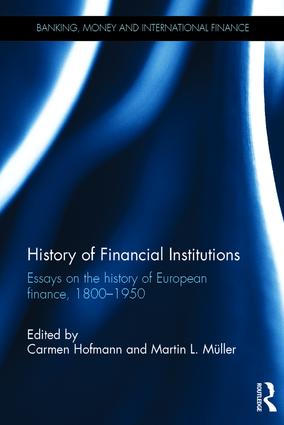 History of financial institutions
essays on the history of European finance, 1800–1950

History of Financial Institutions contributes to the analysis of how the modern corporation, business and finance have shaped and keep on shaping our world. In a collection of nine succinct essays, this volume looks at the role of finance in European history from the beginning of the 19th century to the period after the Second World War. Archivists and financial historians, who are also leading scholars of banking and financial history, investigate the ways in which the international post-war order developed. They draw on often hitherto unused archival sources from central banks and other institutions to reveal the unique histories of a variety of European countries and the paths that have led to the contemporary economic and financial system. The collection includes reflections on (monetary) stabilization, inflation, hyperinflation, globalization and public relations in banking and commerce.

This book is essential reading for banking and finance executives, as well as policy makers with a historical interest. It will also be of importance to academics with a particular interest in economic history, financial or banking history, and European history.

ÍNDICE:
1 Gerald D. Feldman: an appreciation Jeffrey Fear
2 Starting from scratch? The beginnings of Banca Commerciale Italiana: 1893–1894 Peter Hertner
3 Jewish financiers in the City of London: reality and rhetoric, 1830–1914 Randal Michie
4 The financial culture of the Habsburg Monarchy at the end of the 19th century Dieter Stiefel
5 French banks and public opinion: the public’s negative perception of the French banking establishment (from the 1800s to the 1950s) Hubert Bonin
6 ‘Many a slip between cup and lip’: initiating Austrian stabilisation, 1922–1923 P. L. Cottrell
7 Why were there no investment trusts in Germany? An analysis of an anomaly in the German financial industry from 1870 to 1957 Martin L. Müller
8 Comradery, the joys of work, and the struggle to improve performance: Creditanstalt–Bankverein’s corporate newspaper, Gemeinschaft, 1939–1943 Ulrike Zimmerl
9 A non-neutral, non-belligerent country: Portugal during the Second World War from a financial viewpoint Nuno Valério