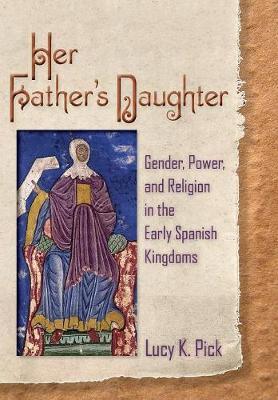 Her father's daughter
gender, power, and religion in the Early Spanish Kingdoms

"In Her Father's Daughter, Lucy K. Pick looks to a much-neglected aspect of the history of the Spanish kingdoms in the eleventh and twelfth centuries. Her book is novel and original."-Teofilo Ruiz, author of A King Travels

" Her Father's Daughter will contribute to and enrich ongoing discussions regarding the role and evolution of the medieval monarchy."-Nuria Silleras-Fernandez, author of Chariots of Ladies

In Her Father's Daughter, Lucy K. Pick considers a group of royal women in the early medieval kingdoms of the Asturias and of León-Castilla; their lives say a great deal about structures of power and the roles of gender and religion within the early Iberian kingdoms. Pick examines these women, all daughters of kings, as members of networks of power that work variously in parallel, in concert, and in resistance to some forms of male power, and contends that only by mapping these networks do we gain a full understanding of the nature of monarchical power.

Pick's focus on the roles, possibilities, and limitations faced by these royal women forces us to reevaluate medieval gender norms and their relationship to power and to rethink the power structures of the era. Well illustrated with images of significant objects, Her Father's Daughter is marked by Pick's wide-ranging interdisciplinary approach, which encompasses liturgy, art, manuscripts, architecture, documentary texts, historical narratives, saints' lives, theological treatises, and epigraphy.