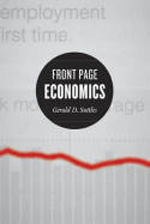 In an age when pundits constantly decry bias in the media, we have naturally become skeptical of the news. But the bluntness of such critiques masks the much more sophisticated way in which the media frame important stories. In "Front Page Economics", Gerald D. Suttles delves deep into the archives to examine coverage of two major economic crashes - in 1929 and 1987 - in order to systematically break down the way newspapers normalize crises. Poring over the articles generated by the crashes - as well as the people in them, the writers who wrote them, and the cartoons alongside them - Suttles uncovers dramatic changes between the ways the first and second crashes were reported. In the intervening half-century, an entire new economic language had arisen and the practice of business journalism had been completely altered. Both of these transformations, Suttles demonstrates, allowed journalists to describe the 1987 crash in a vocabulary that was normal and familiar to readers, rendering it routine. A subtle and probing look at how ideologies are packaged and transmitted to the casual newspaper reader, "Front Page Economics" brims with important insights applicable to our current economic crisis.