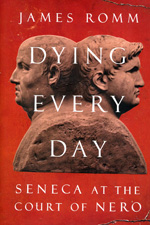 Dying every day
Seneca at the Court of Nero

Was Roman philosopher Seneca the Younger an exemplar of Stoic virtue who, pulled into politics in the service of Emperor Nero, did his best to modulate the young despot’s cruelty? Or was he a shrewd manipulator whose ethical treatises were just a cynical attempt to restore a reputation sullied by his complicity in Nero’s cruel and decadent court? Tacitus, who wrote a lot about Seneca, seems to have had trouble making up his mind. Romm suggests that we might bring together these conflicting portraits by understanding Seneca as a serious thinker who suffered from passivity and obsequiousness, and had the misfortune to live at a time when intellectual activity had become particularly dangerous. Seneca’s elegant humanistic vision (which would influence, among other things, Roman Catholic church doctrine), therefore, was not fraudulent, but aspirational, and somewhat tragic: ideals articulated by a flawed man who was all too aware of his inability to live up to them.