This book provides comprehensive analysis of the recent enlargement of the EU, shedding light on the rationale behind the EU's decisions to enlarge, examining the side effects these choices have on a range of EU policies and particularly on the effect of the Acquis on candidate countries. Emphasis is placed on the area of company law, which occupies a central part in a country's economic planning and therefore its commercial law. Past enlargements are thoroughly explained and the potential impact of the new political landscape in Europe in the wake of the popular rejection of the European Constitutional Treaty on future enlargements is evaluated. A comparative methodology for commercial law drafting in transition and developing economies is put forward and the book concludes with a complete draft of a model company law for transition (and developing) economies. The aim is to provide a template for discussion. This book will be of great interest to those interested in considering the influence that the prospect of EU membership has on transition countries in general, the emphasis being on laws vital to emerging market economies, particularly commercial and company law. 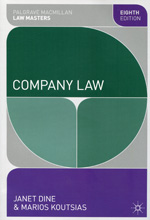