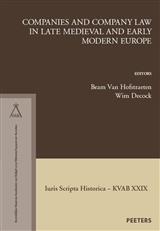 This book collects the proceedings of a workshop on the late medieval and early modern history of companies and company law in Europe which was organized in 2012 by the Louvain research unit of Roman Law and Legal History. In total, seven original and innovative articles resulted from the fruitful confrontation of a younger generation's work and the critical scrutiny of some viri sapientes in the field of research at hand. Two of the articles focus on the history of so called state regulated companies in England and France, while four address various aspects of general private partnerships and early modern corporate practices as could be observed in the Southern and Northern Netherlands during the sixteenth and seventeenth centuries. All of the articles are based on original research efforts and present a variety of new insights on the topic at hand.