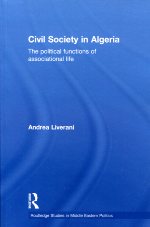 Civil society in Algeria
the political functions of associational life

Between 1987 and today Algeria has been engaged in a conflict pitching the army against Islamist guerilla groups which has killed more than 200.000 people. During the same period, Algeria also witnessed the explosion of more than 70,000 voluntary associations, making it one of the most civic-dense countries in the Arab world. This book analyses the development of these association in Algeria and the state's attempt to retain political legitimacy. Starting from a critique of portrayals of Algerian 'civil society' as a force conducive to democratization, the study examines the changing relationship of the state to voluntary associations in both the colonial and post-colonial eras. An in-depth assessment of the social bases of the associative sphere then leads to questioning its independence from the state, and highlights the role of the associative sector in tempering the fracture between the state and those social groups that most suffered from the collapse of Algeria's post colonial political framework. Finally, the study analyses donors' use of advocacy and service-delivery associations in democracy-promotion programmes, arguing that their focus on the country's 'civil society' contributed to the state's efforts to preserve its international legitimacy. Based on in-depth examination of existing literature and extensive fieldwork conducted at a time when Algeria was still closed to foreign researchers because of the conflict, Andrea Liverani challenges the mainstream views on the political role of associations in democracy, illustrating how 'civil society' can work towards the conservation of an authoritarian order, rather than simply towards democratic change. A lucid contribution to an emerging scholarship, Civil Society in Algeria will appeal to students, academic experts, and NGO/aid practitioners.