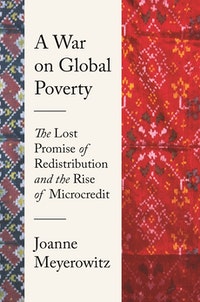 A War on Global Poverty provides a fresh account of US involvement in campaigns to end global poverty in the 1970s and 1980s. From the decline of modernization programs to the rise of microcredit, Joanne Meyerowitz looks beyond familiar histories of development and explains why antipoverty programs increasingly focused on women as the deserving poor.

When the United States joined the war on global poverty, economists, policymakers, and activists asked how to change a world in which millions lived in need. Moved to the left by socialists, social democrats, and religious humanists, they rejected the notion that economic growth would trickle down to the poor, and they proposed programs to redress inequities between and within nations. In an emerging “women in development” movement, they positioned women as economic actors who could help lift families and nations out of destitution. In the more conservative 1980s, the war on global poverty turned decisively toward market-based projects in the private sector. Development experts and antipoverty advocates recast women as entrepreneurs and imagined microcredit—with its tiny loans—as a grassroots solution. Meyerowitz shows that at the very moment when the overextension of credit left poorer nations bankrupt, loans to impoverished women came to replace more ambitious proposals that aimed at redistribution.

Based on a wealth of sources, A War on Global Poverty looks at a critical transformation in antipoverty efforts in the late twentieth century and points to its legacies today.

PART I A WAR ON GLOBAL POVERTY
Chapter 1 The Trouble with Foreign Aid 15
“Assaulted by Waves from Left and Right” 18
The Challenge of World Poverty 29
Rejecting Trickle Down 36
Redistribution? 42
Chapter 2 Redistribution: South and North 53
A New International Economic Order? 56
“To Satisfy, as a Matter of Urgency, the Basic Needs” 66
Jimmy Carter’s Hunger 78
An International Tax 85