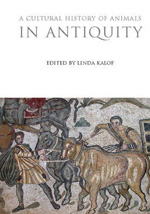 A cultural history of animals in Antiquity

Ed. Linda Kalof. A Choice Outstanding Academic Title, 2008 Animals had a ubiquitous and central presence in the ancient world. A Cultural History of Animals In Antiquity presents an extraordinarily broad assessment of animal cultures from 2500 BC to 1000 AD, describing how animals were an intrinsic part of the spiritual life of ancient society, how they were hunted, domesticated and used for entertainment, and the roles animals played in ancient science and philosophy. Since much of what we know about animals in antiquity is gleaned from the images left by our ancestors, the book presents a wealth of illustrations. Seminal ancient narratives about animals - including works from Aristotle, Plutarch, Ovid and Pliny the Elder - are also drawn upon to illustrate contemporary ideas about and attitudes towards animals. As with all the volumes in the illustrated Cultural History of Animals, this volume presents an overview of the period and continues with essays on the position of animals in contemporary symbolism, hunting, domestication, sports and entertainment, science, philosophy, and art. Volume 1 in the Cultural History of Animals edited by Linda Kalof and Brigitte Resl.